Banking difficulties may continue, but plentiful debt is making a comeback. After Collateralized Loan Obligation issuance in the U.S. notched a post-financial crisis high of $55 billion in 2012, Barclays and Credit Suisse are preparing landmark CLO issues that will comply with new European regulations requiring issuers to “keep skin in the game,” the Financial Times reports. The Canada Pension Plan Investment Board - one of the world’s largest private equity investors - is committing up to $2 billion to “middle market debt transactions and non-traditional corporate lending” via MerchCap Solutions, a new KKR and Stone Point Capital joint venture, that offers underwriting, syndication and advisory services, notes trade publication Canadian Private Equity. This comes on top of news from Bloomberg that Carlyle Group has cut interest payments and arranged cov-lite terms on a $2.7 billion loan for its purchase of DuPont’s auto-paint unit. In a sign that “at least parts of Europe’s financial system are returning to health,” Reuters reports banks are making “a big early payback of ECB crisis cash”.

U.S. “pension funds bet big with private equity”, with average allocation to alternatives standing at 21 percent of assets-under-management and capital earmarked for PE rising significantly every year since the financial crisis. Industry figures and trends are documented in an in-depth Wall Street Journal profile of the Teacher Retirement System of Texas, one of the most enthusiastic advocates of private equity investment among U.S. pension funds.

Yale Endowment’s 2012 annual report is out. Yale does not release annual performance figures, but the university’s PE fund portfolio racked up what the report calls an “astounding 30 percent per annum” since chief investment officer David Swensen launched the PE program – one of the world’s oldest – in 1973. The university has 35.3 percent of assets-under-management invested in private equity, up from 20.2 percent in 2008, and considerably higher than the 10.9 percent allocation of the “average educational institution,” according to the report.

“The smart money ignored Volker on private equity”, Fortune magazine’s Dan Primack claims. “The most obvious example is Goldman Sachs, which in 2007 raised a $20.3 billion private equity fund called GS Capital Partners VI that included approximately $9 billion in commitments from the bank and bank employees (too high a percentage to comply with Volker).” Primack implies that secondary sales of existing private equity funds from banks are set to become relatively rare, and that those that still hold PE portfolios will let them run to maturity.

Whoever you talk to, deal multiples are high. Fortune’s Term Sheet notes that large leveraged buyout purchase price multiples hit 9.2 times EBITDA in the last quarter of 2012 globally, while in the Financial Times, Partner’s Group states European multiples currently stand at 9.7 times EBITDA. Christoph Rubeli, head of direct investments at Partner’s Group, ascribes “inflated” prices to “a sense of urgency to deploy capital” before standard investment periods from the ’05 to ’08 boom years expire.

2013 could prove a banner year for private equity investment in China and Brazil, the Financial Times reports. Slowing economic growth in China and Asia could help GPs deploy more than $100 billion in dry powder, the largest amount of uncommitted capital to target the region in years. “We are at the stage now where entrepreneurs are finding things harder than expected. They are recognizing the need for more operational help,” Roy Kuan, head of Asia for CVC, told the FT. Slower growth has already improved dealmaking in Brazil: “private equity companies completed a record 25 transactions, worth a total of $1.1 billion” in 2012, the FT writes.

Buying & selling between GPs will hit a record in china shortly, if a report from China First Capital is right. With the Chinese IPO market effectively closed, the report documents a growing traffic jam in private equity exits, predicting it will be remedied, in part, by GPs selling their Chinese portfolio companies to other GPs. The potential drawback: an LP may actually own both GPs’ funds, with money entering one pocket and coming out of another. The traffic jam may also lead to more deals in China’s secondary market for PE funds, as impatient investors try to monetize unrealized fund investments by selling their stakes to other investors, Palico notes.

Penguins from SeaWorld: the latest private equity promotion tool. As news broke that Blackstone Group was exploring a sale of SeaWorld Parks and Entertainment to Apollo Global Management, unusual buzz was generated when a couple of the portfolio company’s employees visited their private equity owner. 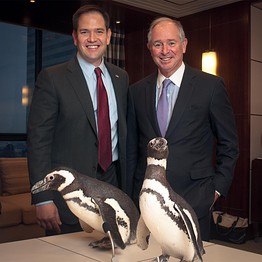 Wondering where the best private equity macro growth is likely to be through 2025? Check out McKinsey & Company’s Cities of the Future interactive graphic.