Speculation continues to mount as to whether we are amidst a VC bubble. Certainly, we are not the first to say this and, in some ways, we might stop asking if we are witnessing a VC bubble but rather when this bubble will pop and to what end this may lead to a jump in VC secondary transactions.

Chinks in the armor: LP frustration an IPO Rush and increased Corporate Venture Activity, OH MY!

Things look rosy at the moment - venture spending in 2018 hit a record high with roughly $131 billion in VC transactions according to Pitchbook. This was in part spurred by the fact that multiples have continued to inch upwards and with them valuations. However, not everyone is happy about this; some LPs have begun to voice concern over prices being paid. Most recently Saudi Arabia’s Investment Fund and Abu Dhabi’s Mubadala Investment Co., two of the largest investors in SoftBank’s Vision Fund, made their displeasure known to the VC giant, highlighting what they see as the constant overpayment for assets.

On the other hand, we are seeing a number of long-time VC darlings now heading to an IPO exit. A cursory glance at the rush of VC backed companies heading to an IPO exit in 2019 is remarkable. Lyft recently went public with Uber looking like it will soon follow, and the list goes on: AirBnb, Pinterest, Slack and Robinhood (to name just a handful) are rumored to be eyeing an IPO exit in 2019 as well. Perhaps more concerning however is just how big these companies got before going to IPO. Bolstered by easy access to cheap capital scale-ups have been able to stay private longer. Staying private has allowed several tech companies to avoid public market scrutiny and instead focus on market-dominating growth strategies while setting aside profitability for another day. This is not to say that market-dominating strategies don’t work but then again are Snapchat, Blue Apron, GoPro and to some extent Twitter cautionary tales of what may come once in the public market?

Finally, corporate venture activity has also become more pronounced. Most recently you have Starbucks who made a $100 million anchor investment in Valor Siren Ventures I. Starbucks is not alone in doing this, a number of corporations possess excess cash, especially now that US corporate tax has been reduced from 35 percent to 21 percent. This could be another red flag as the last time corporate venture spiked was also during a bull-market… in the late 90’s just before the dot-com bubble.

Will history repeat itself and result in another tech burst?

Some reports go as far as calling the current situation “tech bubble 2.0” and predict that the fallout could be worse than that of 2000. Those who are most skeptical are calling the situation a Ponzi-scheme where each round of funding buoys valuations further and further based on growth and not bottom-line economics. Take for example a recent study by the US National Economic Bureau which looked at the valuations of unicorns and determined that nearly half of the 135 firms they examined were found to be 50% overvalued and should be valued below their $1 billion valuations. The evidence is certainly cause for concern among investors, which may lead to a race to cash out first when the bubble finally bursts.

A Rush to Secondaries: When IPOs or M&A don’t cut it

While the surge in IPO exits this year (especially by dollar amount) are sure to make many investors happy, liquidity remains a real issue for the many who are still in VC funded growth mode. Over the past decade VC deal count has risen fairly consistently but the last 5 years have failed to keep pace with diminished exit activity creating a gap that may drive investors to secondaries in search of liquidity to fill the growing void. 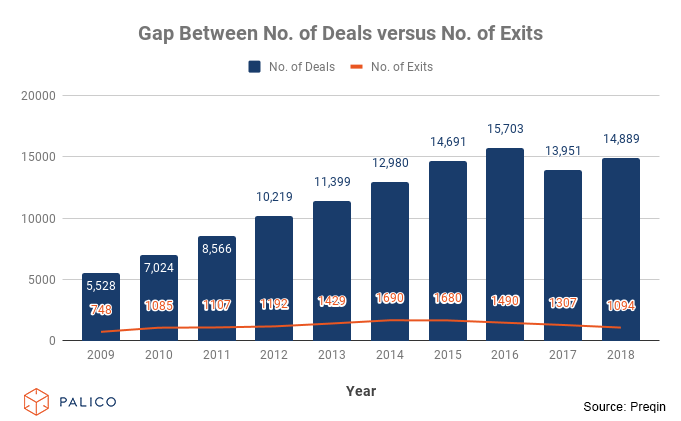 We have already seen secondary deals gain traction amongst VC funds. With VC backed companies taking longer and longer to exit some LPs have already used secondaries as a method to access liquidity. It will be interesting to observe VC secondaries over the course of the year as we make our way to 2020. With secondaries becoming more mainstream and with the potential of a bubble on the horizon we may need to affix secondaries right next to M&A and IPOs as the third exit option - especially in the event of a squeeze in the form of a bubble. There seems to be a rush to IPO exits, will a rush to secondary exits be next?

About the Palico Marketplace

Palico’s marketplace is a digital platform for Private Equity professionals to sell and buy secondary stakes from early to tail-end funds. It is an effective liquidity solution to sellers of all fund sizes and has been especially valuable for single lines below $20 million.

Have you sold a VC fund stake on the secondary market or do you have general thoughts/questions on the piece? Please let us know at info@palico.com